You know you need good credit to take out a loan, a mortgage, or your friend with expensive taste.

But do you understand how exactly your credit score affects your car insurance rates? The answers might surprise you.

Turns out, for the past twenty years or so, car insurance companies have been using credit scores to determine premium rates (aka how much money will be coming out of your pocket each month.) So what on earth do the two have to do with one another? There’s a statistical correlation between your credit score and how likely you are to file a claim, and insurers use this correlation as the reason for the practice of raising rates for drivers with bad credit. 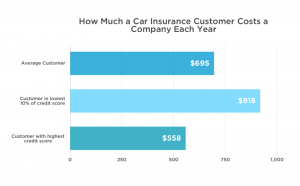 A 2003 study done at the nonpartisan Bureau of Business Research at UT’s McCombs School of Business, confirmed this correlation. Study author Bruce Kellison explains that there is a relationship between how much a consumer costs an insurance company (aka incurred losses) and that customer’s credit score. Kellison and his colleagues examined more than 175,000 separate policies, and found that the average loss per policy, across the entire dataset, was $695. But for those policies in the lowest 10 percent of credit scores, the average shot up to $918.

There’s an interesting subpoint to this practice: Insurance companies often don’t use the FICO credit scores available through Equifax, Experian, or TransUnion. Instead, they have the capabilities to create their own versions of these scores. Kellison spells it out in his study: “Individual insurance companies can (and do) use individual credit histories to create their own models and credit scores. If an individual insurance company can create a “better” (more predictive) credit score model, the relationship between credit scoring and losses will be even stronger than that found in this study.” Crazy, huh?

Now just because this is common practice doesn’t mean people think it’s right. In fact, there are three states where the practice has been banned all together: Hawaii, Massachusetts, and California. Shouldn’t your driving record be the biggest predictor of, well, your driving record?

Consumer groups, including the Consumers Union, have come out in opposition to the practice. Check out this particularly cranky bit from their report:

Consumer Reports sought and obtained scoring models filed with regulators in Florida, Michigan, and Texas used by 9 of the 10 largest U.S. auto insurers. CR found that there are no standards. Each company uses different models and weighs different credit-report information. Some big companies find scoring useful only for new customers, not renewals, while others may use it for both. Moreover, CR notes that the credit data from which the scores are derived have a reputation for being inaccurate and out of date.

Advocates from Consumers Union (which is the publisher of Consumer Reports) have tried to urge legislators and regulators in several states to ban the use of credit scoring in auto (and home insurance, where it also happens.) Insurers, perhaps not surprisingly, have fought back.

Kellison’s own study addressed this opposition. The study notes, “A common criticism of credit scoring and its use in underwriting decisions is that it may discriminate against low-income and/or minority applicants, and that its use, in effect, amounts to “red lining.””

No matter your opinion on the issue, it does affect you, so the best steps you can take involve keeping your credit as squeaky clean as possible. This means:

So what are your thoughts? Do you feel this practice fair, or shady? Leave us a reply below.

4 Consequences Of Driving Without Insurance