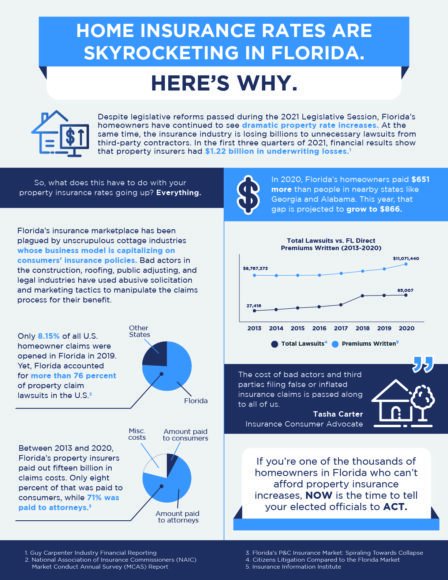 This article is from the Insurance Journal January 3, 2022 is very informative and helps homeowners to understand why the cost of homeowners insurance continues to increase. Homeowners need to reach out to their legislators and encourage them to speak up against the fraud being committed and stand up to the trial attorneys who bring on frivilous lawsuits.

In an effort to increase awareness of the need for further reforms that could improve the state’s distressed property insurance market, an independent agents’ organization has released a set of infographics for consumers.

The Florida Association of Insurance Agents last week posted the flyers, urging agents to use them to help explain to policyholders why premiums have increased.

“As the market has continued to spiral downward, FAIA knows that agents are trying to find adequate coverage while also explaining significant rate increases to consumers,” FAIA officials said in an email to members. “To that end, we have developed a one-page consumer education piece that includes data, infographics, and a quote from Florida Insurance Consumer Advocate Tasha Carter, to explain the issues contributing to the crisis.”

One flyer reads: “Despite legislative reforms passed during the 2021 Legislative Session, Florida’s homeowners have continued to see dramatic property rate increases. At the same time, the insurance industry is losing billions to unnecessary lawsuits from third-party contractors.”

The flyers note that in the first three quarters of 2021, Florida property insurers had $1.2 billion in underwriting losses, according to reports from Guy Carpenter, a reinsurer and industry analysis firm.

The graphics also include the often-cited report from the National Association of Insurance Commissioners, which found that only about 8% of homeowner claims in the United States in 2019 were made by Florida policyholders, but more than 76% of all claim-dispute lawsuits were in Florida.

The graphics quote from the 2021 report to the Legislature by industry consultant Guy Fraker, which contends that 71% of claims costs paid by insurers in recent years went to attorneys, and only 8% went to consumers.

The info also notes that Florida homeowners paid $651 more per policy, on average than did policyholders in Georgia and Alabama. One flyer asks homeowners to urge their elected officials to take action.

“We believe this will be a valuable tool to educate agents and their customers,” the FAIA said.

Six Things You May Not Know About Storm Insurance

Should You Get Insurance For Your Kid’s New Drone?