GM has announced that it will be offering a way for parents to track their teens’ driving behavior in order to help cut down on accidents.

In the U.S., the fatal crash rate per mile driven for 16- to 19-year-olds is nearly three times the rate for drivers ages 20 and over, according to the Insurance Institute for Highway Safety.

“Teen Driver,” as GM is calling it, will debut in the 2016 Chevrolet Malibu.

The new system can be set to track the distance driven, the maximum speed traveled, any over-speed warnings issued during a drive, stability control events, antilock brake events, forward collision alerts and forward-collision braking events (if the vehicle is equipped to offer them). 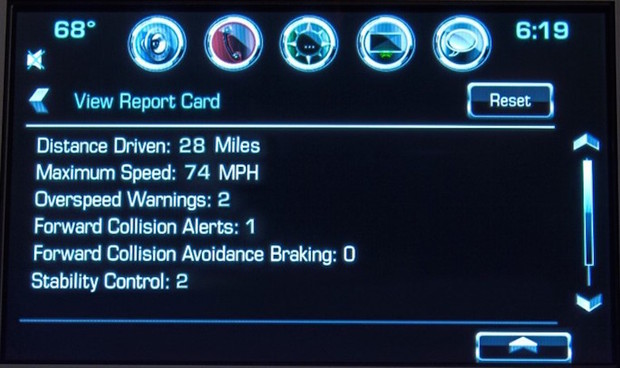 To use Teen Driver, a parent needs to unlock the feature by creating a PIN in the “settings” menu of their available MyLink system, which then allows them to register their teen’s key fob. The system’s settings are turned on only to registered key fobs.

After a car is driven, a parent can enter a password on MyLink and see a report card of the driving event.

“We developed this system so parents could use it as a teaching tool with their kids — they can discuss and reinforce safe driving habits,” GM safety engineer MaryAnn Beebe said in a statement. “As a mother of two, I know anything that has the potential of keeping one’s family safer is of great value to parents.”

Driver-tracking systems are nothing new. A vehicle’s Engine Control Unit (internal computer) and on-board diagnostics (OBDs)already allow insurance companies to track driver behavior in order to offer lower rates to good drivers. Those systems, however, require a dongle to be plugged into any vehicle’s OBDII port, which is located under the driver-side dashboard.

GM is calling Teen Driver the first built-in system of its kind that lets parents view on a display how their teenager drove the vehicle.

The new system not only tracks what happens in the car, but also supports safe driving by muting the audio of the radio or any device paired with the vehicle — such as a smartphone — when front seat occupants aren’t wearing their safety belts.

The Difference Between A Home Warranty & Homeowners Insurance