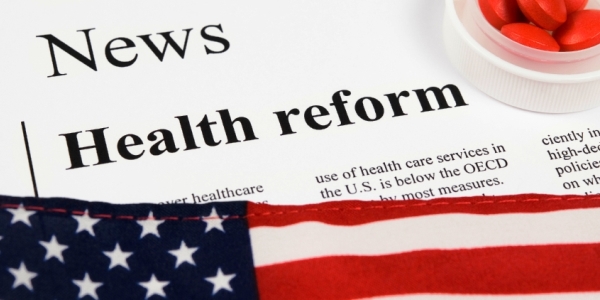 The days of Americans getting health insurance through their employers may be numbered.

As the Affordable Care Act goes from thousands of pages of legalese to real-life public policy, the future of employer-provided health insurance is one of the most fascinating questions. Will employers call for, and their workers accept, the practice of buying health insurance through government exchanges? How much will companies save, and will they pass those savings on to employees? Will it make workers more mobile and ready to shift jobs, or will employer-paid health insurance become a sought-after perk?

The answers go to the heart of how things work in a sector that is one-eighth of the American economy. A new report gives some hints of how large the impact might be.

By 2020, about 90 percent of American workers who now receive health insurance through their employers will be shifted to government exchanges created by the health law, according to a projection by S&P Capital IQ, a research firm serving the financial industry.

It’s not an outlandish notion. Ezekiel Emanuel, an architect of the Affordable Care Act, has long predicted a similar shift.

But the scope and speed of the shift are surprising. So is the amount of money that companies could save. The S&P researchers tried to estimate what it would save the biggest American companies. Their answer: $700 billion between 2016 and 2025, or about 4 percent of the total value of those companies. The total could reach $3.25 trillion for all companies with more than 50 employees.

They assume those savings will accrue to companies’ bottom lines, though there are also compelling reasons to think that some of those savings would end up in the pockets of American workers in the form of higher wages or other benefits.

The idea is this: Now that federal and state exchanges exist where anyone, even those with pre-existing illnesses, can gain coverage, employers might decide to give their workers a stipend to pay for health insurance on the exchanges rather than sponsor a plan themselves.

In truth, the American system of health care, in which most people get their private health insurance through their employer, has always been rather odd. Why should quitting a job also mean you have to get a new health insurance plan? Why should your boss get to decide what options you have and negotiate the cost of them? Employers don’t get to select our auto insurance or mortgage company, so why should health insurance be any different?

If there is uncertainty around how the employer-provided health insurance system will evolve, there is even more around who will ultimately pay the bill. It could be the federal government, via insurance subsidies, or individuals who must pay for more of their health care. In a perfect world, lower costs would come from a more efficient system that provides better care at lower costs. But no one knows what the actual system of, say, 2025 will look like, any more than people could have foreseen the decline of pensions when the 401(k) option was added to the tax code.

Michael G. Thompson, managing director at S&P Capital IQ, argues that the parallel with defined-benefit pension plans is an apt one. For decades, those plans were a major benefit offered by large employers. But as other options became available that allowed employers to more cheaply provide retirement benefits with fewer administrative headaches, which 401(k)s provided, employers shifted to 401(k)s en masse.

“We still expect some companies to hold on to their health care plans, just as some private companies still have pensions,” Thompson said. “But we think that the tax incentives for employer-driven insurance are not enough to offset the incentives for companies to transition people over to exchanges and have them be more autonomous around management of their own health care.”

The advantages are particularly clear for companies with lower-paid workers, who may be eligible for federal subsidies under the Affordable Care Act aimed at those employees making up to 400 percent of the poverty line.

Not everyone is so sure. Employers may not love the administrative challenges of administering a health plan, but they have been offering these plans voluntarily for decades, because employees value the perk. An employer who backs away from offering a health insurance plan directly, instead sending workers to the exchanges, may lose a competitive advantage in hiring. (Yet companies’ experience with substituting 401(k)s for pensions may have taught them that employees had little choice in the transition, and just accepted it.)

There is another strong reason that employers might not rush for the exits. When an employer subsidizes a worker’s health insurance plan directly, the subsidy is tax-free to the employee. So the employer is effectively getting more bang for the buck in its total compensation. If an employer gives its workers extra pay to help them buy health insurance on an exchange, that money is taxable income.

Add to that a $2,000 per-worker annual penalty that the Affordable Care Act charges large employers that do not provide insurance, and the pathway toward employers dropping coverage may not be as short and direct as the S&P researchers suggest.

“For most firms, there isn’t a net gain to dropping coverage for active workers,” said David Cutler, a health economist at Harvard who advised the Obama administration in writing the law. “The subsidies are more than offset by the higher taxes workers will pay.”

The story may be different, Cutler added, for retirees. Where now many employers pay for health insurance for retirees not yet eligible for Medicare, that may change.

Hurricane Matthew A Reminder That Florida Insurance Market Is ‘Untested’

Is your Homeowners Insurance Policy ready for Hurricane Season?