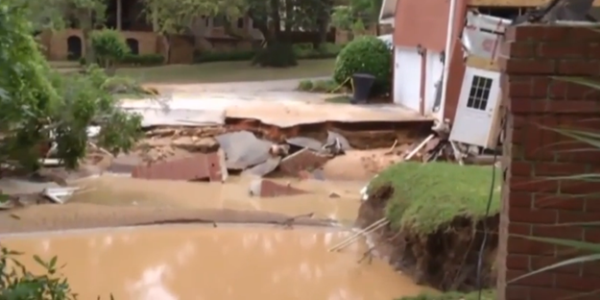 Pensacola took it on the chin this week with record-setting rain and deadly flooding.

Panhandle natives say they weren’t prepared for the damage torrential rain and flooding could deliver, but people in Pensacola are offering helping hands in the cleanup process.

As the Panhandle continues recovering, many homeowners are hurting with the loss of property.

Some of the most intense destruction occurred in a community called “Seville,” where more than 2 feet of water ravaged the neighborhood, tearing apart the asphalt, drowning vehicles on the roads and leaving them stranded.

The damage led Gov. Rick Scott to declare an emergency in 26 Florida counties, including Escambia County.

Pensacola homeowner Frank Silver said a wall of water rushing at his home eventually took out his foundation on the backyard side of the house — and he heard it happening.

“The only reason I could see was because of lightning flashes,” Silver said. “(It) looked like white water rapids coming right toward us.

“Then my wife and daughter started hearing some strange noises: cracks, pops, travertine floors. They were breaking,” Silver said. “(When) my daughter noticed (a) crack in (the) floor, (it was) time to get out.”

As Silver, his wife and his daughter escaped, someone with a U-Haul offered help recovering what they could, until nerves got the best of them.

“They moved some furniture,” Silver said. “While they were there, part of the den floor dropped off. So they got a little scared at that time. Not that I wasn’t.

“We were able to get some stuff out.”

Many people are leaving ruined property on the curb as they continue the recovery process.

“Sure, we knew we were going to get a lot of rain, but we’ve gotten a lot of rain a lot of times,” said Dean Williams, a Pensacola home inspector. “We had no idea that it was going to keep on, and flood things like it had.”

Silver, Williams and Irby all fear the worst for Silver’s home — and are grateful the family wasn’t hurt.

“We bought (it in) 1993,” Silver said. “We’ve been through Erin, Opal, all the named storms. Ivan was probably the worst. We had nothing like this.

At any one time, 20 people (have been) out here with cameras, including news media,” Silver said. “I guess they’d never seen anything like this. I wish I hadn’t either.”

From inside — and from outside — Silver’s home, the damage is staggering.

“I see these people getting out of the house what they can, and starting over,” Irby said. “Leveling this house… (the) structural integrity of this is shot.”

“Listen to Frank Silver who recently had his house damaged by a flood that most people believed would never happen to them,” continued Hodgers. “Frank’s home is in a flood zone X – in fact, roughly 87% of Escambia County is in a flood zone X. Now that two days of heavy rains have resulted in massive flood damage to most of Pensacola and a large portion of the Florida Panhandle, does this mean they don’t need flood insurance?”

“It’s important to note,” warned Hodgers, “that just because FEMA designates an area or zone  as a low risk for  floods absolutely does not mean that you’ll never experience a flood.  It’s important to protect yourself, regardless of the level of risk.”

This App Will Notify Family, Authorities If Your Phone Detects You’re In An Accident