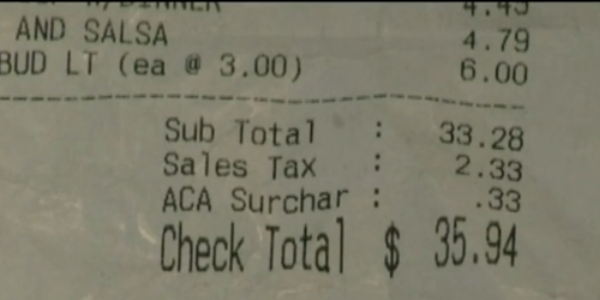 Customers of some Gator’s Dockside restaurants in Central Florida are now being charged more to cover worker health care costs.

A 1 percent surcharge had been added to checks at Gator’s Dockside restaurants in Clermont, Eustis, The Villages and Lakeland, informing customers that the cost will cover health insurance that the owners will be required to provide for employees under the Affordable Care Act.

“We just want to be transparent with that cost.  We want everyone to know this is what its going towards,” said Clermont Gator’s Dockside General Manager Chayse Neal. “We’re not increasing costs just because.  It is a fee that we’re paying.”

The participating restaurants say without the extra income, they would be forced to cut employee hours.

Gator’s Dockside has around 500 employees with locations in Central Florida and in the Jacksonville area. The chain began rolling out the extra charge earlier this month and has posted signs warning customers about the change.

Managers say the surcharge won’t cover the entire cost of the health care increase, but the mandate has forced restaurants to hire human resources representatives and an outside compliance firm to handle extra paperwork.

“Instead of increasing menu prices 5, 10, 20 percent or whatever we need to do, if we did a one time untaxed surcharge it would be cheaper in the long run,” Neal said.

Neal said the added fee is not any sort of political statement of publicity stunt.

“We chose not to do it because we know its the cost of doing business,” said Joe Foranoce, director of operations of the Baldwin Park Gator’s Dockside. “We felt we did not want to pass that surcharge or that cost on to our guests.”

The group that is not adding the surcharge told Local 6 they will not be hiding the healthcare costs by raising the prices of food and drinks.

How well do you know your homeowner’s insurance policy?

Here’s What Just One Ticket Does To Your Insurance Rate