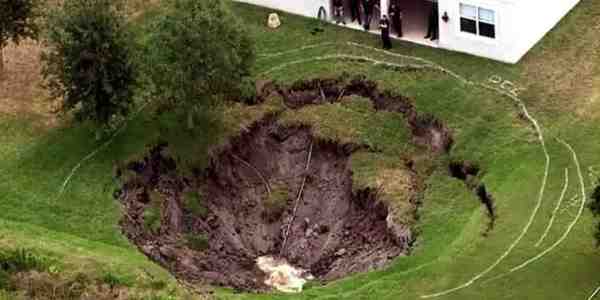 State geologists already have been to 30 sites and mapped about 50 sinkholes as they begin to plumb the depth of the state’s vulnerability to ground collapse.

In August, Florida received a $1.08 million federal grant for a three-year statewide study, starting last month with a pilot study in Columbia, Hamilton and Suwannee counties. The pilot will end in May 2014. That area was selected for the pilot because it’s “geomorphically diverse,” or has more of a wide variety of the state’s many geological features, said geologist Clint Kromhout.

The Florida Geological Survey and Florida Department of Emergency Management are collaborating on the study. “Essentially, what we’re looking for is all the variables that explain why a sinkhole occurs where it does,” Kromhout said. The result will be a detailed, multi-layered map that shows where sinkholes are most likely to form, but doesn’t predict where and when individual sinkholes will occur.

“If someone could do that, they’d be a very wealthy person,” Kromhout said. He also would not say whether insurers would one day use the map to justify increases in sinkhole insurance rates. “But I think they will definitely have an interest in the map,” Kromhout said.

State regulators recently approved increases of 20 percent for sinkhole insurance for Hernando and Pasco counties and 50 percent for Hillsborough County, but they are scheduled to be phased in over a number of years.

The study was prompted by Tropical Storm Debby. The 2012 storm’s heavy rains triggered the formation of scores of sinkholes, many in Hernando County.

Three counties in the Tampa Bay area are known as “sinkhole alley.” Two-thirds of the sinkhole damage claims reported to the state Office of Insurance Regulation in 2006-2010 came from Hernando, Hillsborough and Pasco counties.

Last month, a sinkhole swallowed parts of two Dunedin houses and forced several other homes to be evacuated. In August, part of a three-story villa at Summer Bay Resort in Clermont, west of Orlando, was swallowed by a 100-foot sinkhole; no one was reported hurt. And in February, a Seffner man died when a sinkhole opened under his bedroom as he slept. The body of 37-year-old Jeff Bush was not recovered.

Sinkholes are common in Florida because of porous rock, such as limestone, that stores water underground. Over time, acid in the water dissolves the rock, creating a void. When the earth above the limestone gets too heavy, it can cave in, forming a sinkhole.

Kromhout said researchers will look at underground wells and streams, as well as the state of soils and sediments to determine where the ground is likely to collapse. The study was welcomed by Sonny Nobles, mayor of Live Oak in Suwannee County, where sinkholes caused by Debby pocked the area like Swiss cheese.

“I hope it’s beneficial to us,” he said. “We’ve had a lot of experience with sinkholes as of late.”

The Difference Between A Home Warranty & Homeowners Insurance