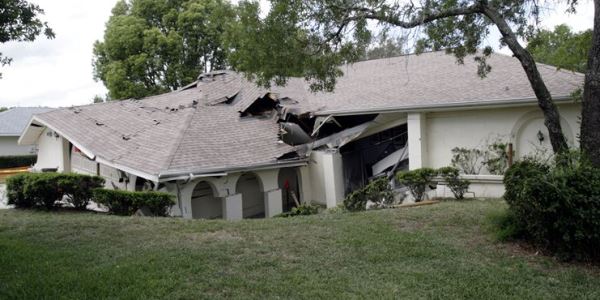 More than 12,000 policyholders have sued the state-run insurer to get their claims paid — and, new data show, the cost of defending against those suits is rising, to more than $21 million for the last three months of 2013 alone.

Some of the longest-fought battles are in the so-called sinkhole alley — the section of the state that includes Hillsborough, Hernando and Pasco counties, which rest on a porous, cavity-prone limestone bed. The amount the agency spends just on sinkhole litigation there has doubled — from an average of $944,345 per month in 2012 to $2,050,106 in 2013, according to data provided last week to state Rep. Frank Artiles, R-Miami.

More than 2,100 homeowners have sued Citizens for compensation for sinkhole damage reported more than two years ago, with the combined legal bills now costing Citizens more than $4.4 million a month, or about $2,100 per sinkhole claim.

To deal with the mounting lawsuits, Citizens is fighting in the courtroom and at the Capitol:

• It is hiring the Palm Beach law firm Ackerman, Link and Sartory for $6.5 million over five years to “coordinate” a get-tough legal strategy that includes denying claims and delaying payment to force settlements.

• It is backing legislation (SB 416) that would bypass homeowners and leave the decision of how to repair a home to an approved set of contractors, many of which favor the controversial “grout in the ground” repair method.

• It is lobbying for legislation (SB 708) that would prevent homeowners from signing over insurance payments to contractors in order to get emergency work completed.

• And it is urging homeowners to settle their lawsuits so both sides can avoid the expense of a court case.

Last week, Citizens announced it had reached a “global settlement” with the Central Florida law firm Boyette, Cummins and Nailos, which represents more than 300 policyholders with disputed sinkhole claims.

The agreement “will allow homeowners to make critical repairs to protect their families and their neighbors without spending more time in court,” the company said in a statement.

“What we have announced is we have entered into a settlement through counsel with 300 insureds,” said Dan Sumner, Citizens’ general counsel. “What has not occurred is, we have not received agreements [from each of those policyholders].”

He added, “No one has opted out of this deal.” But, he acknowledged, no one has signed on, either.

Artiles, a licensed general contractor and appraiser, and others said the settlement announcement was premature and misleading.

“If Citizens is trying to take credit for settlements before the homeowner agrees, you have to wonder what other misrepresentations are they making?” said Dan Fritz, general counsel for Sinkhole Public Adjusters in New Port Richey. “Citizens is making a habit out of violating the public trust. They need to get back to paying claims and stop wasting our money.”

Artiles suggests the company could save the money it is spending on legal fees — including the $2,100 it is now spending per sinkhole claim — by simply paying policyholders what they are owed.

“You have been misled, and that is part of their game,” he said. “They have to justify spending this money on the coordinating counsel and look like they’re doing something for the people.”

The company says the savings will amount to about $30 million in legal costs and repair fees.

Artiles, a harsh critic of the state-run insurance company, pounded Cititzens with public-records requests, obtaining a batch last fall that showed the company was spending $2 million a month on legal fees for plaintiffs’ attorneys. The documents he received last week show the company is paying an equal amount each month to 104 separate law firms that work for the company to defend against the claims.

Artiles also attended the December meeting of the Citizens Board of Governors and urged it to pull back from the legal battles.

“The board has a fiduciary responsibility to the policyholders in Florida to not waste money,” he told board members. “You’re spending millions of dollars for no reason other than you’re giving a giveaway to these law firms that are not doing anything.

“You, as a board, have an opportunity to ‘right this ship,’ ” he said. “Control your costs.”

Citizens executives defend their position of challenging homeowners’ claims, saying that too often policyholders don’t make sinkhole repairs when they receive the check for their claims, resulting in communities left with damaged homes and declining property values.

“It is true plaintiff counsel would love it if we’d pay what we submitted on every single claim,” Citizens CEO Barry Gilway told Artiles at the December meeting. “All that would do is dramatically accelerate the loss costs at Citizens.”

He noted that 87 percent of the growth in claims for water damage has been in Miami-Dade and Broward counties, suggesting it is a “runaway” environment and an organized effort to gouge Citizens.

Meanwhile, the cost of litigation continues to climb, even after Link’s firm was hired to coordinate the legal strategy. Since August 2012, Citizens has also spent $27 million on expert witnesses, geotechnical and investigation costs in defending their cases.

5 Ladder Safety Tips For The Holidays, Or Anytime